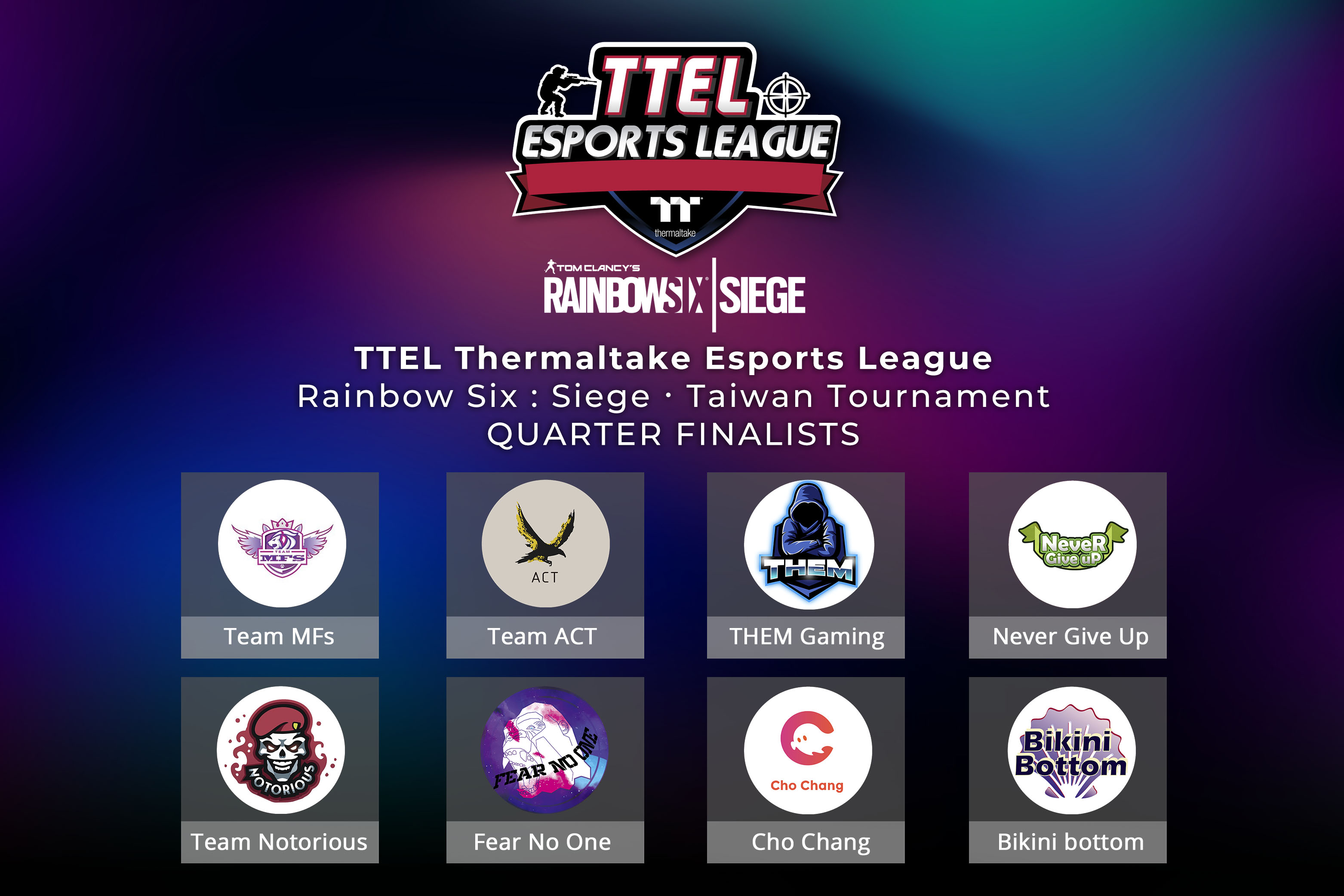 Team MFs
Established in September 2019, Team MFs is an all-female Rainbow Six Siege esports team. The team is on a mission to prove themselves by playing at their highest level at all Rainbow Six Siege tournaments. The team also features two new team members, senior players PDDHenry and ShonSan.

Team ACT
Established in February 2019, Team ACT is made up of players from different parts of Taiwan. The passion for esports drives them to become “fans that can play”. With no professional training, the team may not have the best skills, but will continue to “Keep Trying; Keep Learning”.


Team THEM Gaming
Established on June 28th, 2019, THEM Gaming is composed of a group of Rainbow Six Siege fans. The team goal is to perform at their best at all major competitions, and to leave no regrets. Since the start, the team has undergone several personnel changes, making each game a fresh new experience. Nevertheless, the team overcame the challenges coming their way, and won sixth place in the first season of the Pro League with less than a week of training. The team mission is to play with no regrets and create their own game highlights.


Team Notorious
Established on February 12th 2020, Team Notorious is composed of young gamers around the age of 19. The team mission is to represent Taiwan on the international stage and participate in ESL tournaments with the ultimate goal of going pro. Each member has a unique skill set and plenty of tournament experience. The team goal is to realize their dreams and achieve global recognition.


Team Cho Chang
Established on February 2020, Team Cho Chang is made up of former members from the APEX, ECA, IGS teams and SF2 players. Currently the team is focused on Rainbow Six Siege tournaments, and hopes to win big at the championships through intensive training.


Team Never Give Up
Established in early 2020, Never Give Up is made up of Rainbow Six Siege fanatics. Team member L3K is an experienced esports tournament player, and team members BLUE and YongFa come from different gaming backgrounds. Kaku0300 and Fa1Th30 are players with skills not to be underestimated. Like the team name, they will never give up and hope to bring home the championship title.


Team Fear No One
Established near the end of 2019, Team Fear No One was formed after several trials and eliminations. Each member is keen on gaining more competition experience and bettering their skills by competing in major esports tournaments. Team Fear No One hopes to play well at the quarterfinals, and in the future have the opportunity to step onto the world stage.

Alongside a thriving professional esports scene and a community of over 50 million registered players, Tom Clancy’s Rainbow Six Siege puts players in the middle of a fast-paced, ever-evolving multiplayer experience grounded in the selection of unique Operators. Using the right mix of tactics and destruction, Rainbow Six teams engage their enemies in sieges, where both sides have exclusive skills and gadgets at their disposal. Defenders prepare by transforming the environments around them into modern strongholds, while attackers use recon drones to gain intel for carefully planning their assault. With access to dozens of Operators inspired by real world counter-intelligence agents from around the globe, players can choose exactly how they want to approach each challenge they encounter. Through the constant addition of new Operators and maps that add to the depth of both strategy and combat, the unpredictability of each round of Rainbow Six Siege sets a new bar for intensity and competition in gaming.

Ubisoft is a leading creator, publisher and distributor of interactive entertainment and services, with a rich portfolio of world-renowned brands, including Assassin’s Creed, Just Dance, Tom Clancy’s video game series, Rayman, Far Cry and Watch Dogs. The teams throughout Ubisoft’s worldwide network of studios and business offices are committed to delivering original and memorable gaming experiences across all popular platforms, including consoles, mobile phones, tablets and PCs. For the 2018-19 fiscal year Ubisoft generated Net Bookings of €2,029 million. To learn more, please visit www.ubisoft.com .


We have detected a different Store for You, According to your country.